Higher Education Commission has immediately stopped the admissions in all departments including medical due to administrative crisis in ISRA University Hyderabad. 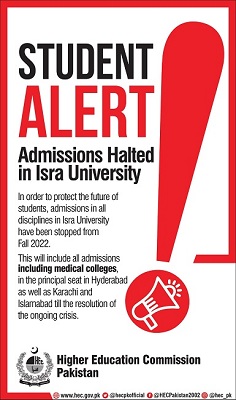 This decision by HEC will also apply to Karachi and Islamabad campuses.It is said that Chairman HEC Dr. Mukhtar had called the two groups in view of the ongoing crisis in Isra University Hyderabad.He gave the groups two hours to iron out differences and improve matters, but differences persisted.Chairman HEC took strict notice of this and immediately stopped admissions to all departments including medical in Isra University.An alert regarding admissions has also been issued on the HEC website.It is learned that the HEC has given two months’ time and has warned that the matters should be put right or else the Chief Minister of Sindh will be approached to close the university.

The HEC has further said that the admitted students will be transferred to nearby universities so that their future can be secured.