Islamabad : President Dr Arif Alvi Wednesday called for enhancing bilateral collaboration between Pakistan and the United Kingdom to improve the quality and standards of higher education in the country
He emphasised that improvement in the education sector would open up new avenues in the fields of health, agriculture and artificial intelligence. 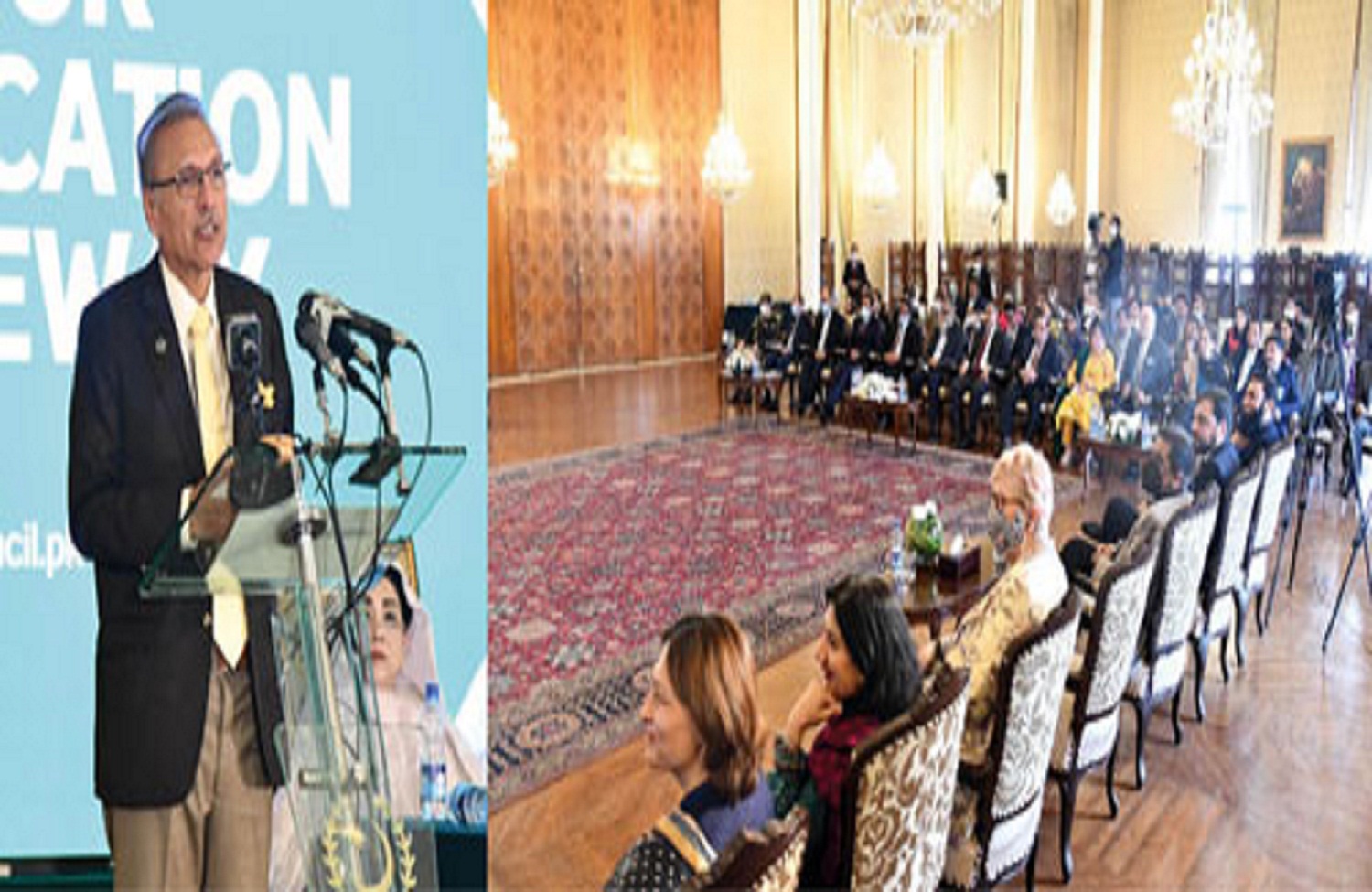 The president, addressing an event on Pak-UK Education Gateway, said the UK had always been supporting Pakistan, particularly in the fields of education and health.

The Gateway Programme aims to enhance partnership between the higher education sectors of Pakistan and the UK in the areas of innovative and collaborative research, higher education leadership, quality assurance and standard setting, distance learning, international mobility and transnational education.

The program will support the ambitions set by the HEC in Vision 2025 which encompasses targets to increase gross higher education enrolment by 15 per cent, PhD faculty by 40 per cent, the number of universities to 300 and a total enrolment to 7.1 million.

President Alvi said since partition, the UK had been the first destination for Pakistanis to get education which also emerged as foundation of learning.

Even currently, around 6,000 Pakistani students were studying there, he added.

The president also spoke high of the British Council’s previous initiative of ‘Alif Ailan’ to promote STEM education in Pakistan.

He appreciated the contributions of UK government towards the development of education sector of Pakistan.

Lauding the British Council s plan to spend around 10 million pounds in higher education under the Pak-UK Education Gateway initiative, he said it would open up new avenues of learning for the Pakistani youth.

He said owing to the resource constraints, Pakistan could not spend the required funds in the research sector and the UK cooperation would help fill the gap.

The president emphasized the need for enhancing the number of graduates to meet the national and global demand for skilled professionals, particularly in the field of Information Technology.

He said the market required millions of skilled people only for data analysis and strategy as in today s era, everything had been linked with the artificial intelligence.

President Alvi also reiterated that the financial empowerment of women was not possible without good education and health.

He told the gathering that the State Bank of Pakistan was about to launch a facility to enable the women open their bank account while being at home, which he said was digital spread and could lead to the financial empowerment of women.

The president also emphasized the filling of gap between the technological innovations and social decision makers to capitalize on the potential of Pakistan s youth bulge.

He also suggested enhancing Pak-UK cooperation in the fields of intangible cultural wealth like local languages, storytelling and embroidery, also advocated by the United Nations.

In his address, Federal Minister for Education Shafqat Mahmood said British Council had been partnering with Pakistan which even further strengthened during the COVID-19 pandemic.

He said with a vision for exponential growth in higher education and faculty exchange between the two countries, the Gateway was a commendable initiative.

Mentioning the allocation of Rs 123 billion for higher education in the last budget and provision of scholarships to youngsters, the minister said the government was also focusing on skill development of the academia.

He said the demand for skill training was increasing even more than the degree which necessitated a special focus by the universities.

Chief Executive of the British Council Scott McDonald appreciated the remarkable achievements by the HEC under the Gateway program and said the education had always been a priority in the Pak-UK cooperation.

He said the bilateral cooperation under the Gateway initiative would reinvigorate the higher education sector in Pakistan while focusing on multiple subjects like climate change, strategic development and others.

He said the British Council stood ready to support Pakistan in the sector and would continue to collaborate further for the promotion of higher education in the country.

Executive Director of Higher Education Commission Shaista Sohail said the Pak-UK Gateway partnership was conceived in 2018, developed and designed by the HEC and British Council in collaboration with the universities.

She said the project was going a long way to ensure the quality of the higher education which also helped Pakistan in launching an online teaching facility during the pandemic.